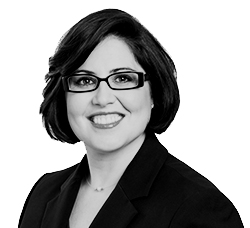 Morriah concentrates her legal work in resolving family disputes. She has a complementary practice in both family law and trust and estate litigation. Morriah is a trial lawyer with an active tri-jurisdictional practice in Maryland, Virginia, and the District of Columbia. Morriah’s years of experience in settling disputes complements her extensive trial practice work so that she can serve a broad range of client needs, from challenging litigation to the thoughtful, personal settlement work necessary to preserve family relationships notwithstanding difficult legal disputes. While her first goal is to preserve family resources by keeping cases out of court, when the case requires it, Morriah provides vigorous representation in trying court contests. Morriah has been specially trained in the Collaborative Law process and can represent clients in any type of out-of-court settlement process.

Morriah earned her undergraduate degree in Public Policy and American Institutions at Brown University and her law degree and Certificate: Law and Health Care at the University of Maryland School of Law. Morriah had the honor of serving as a trial court judge’s law clerk prior to joining Pasternak & Fidis in 2007. Washingtonian magazine interviewed and quoted Morriah in one of its issues, and The Maryland Daily Record quoted Morriah’s legal analysis in September 2014. Super Lawyers recognized Morriah as a “Rising Star” 2013 through 2016 and as a “Super Lawyer” in 2018 and 2019.

An avid tennis player, Morriah has qualified for the United States Tennis Association’s national championships three times. Her tennis teams have won both State and Mid-Atlantic Sectional Championships multiple times. Morriah has been the captain of a competitive Montgomery County, Maryland women’s tennis team since 2008. Morriah also has a Mah Jongg group and is a novice sprint triathelete. She volunteers each year for the Brown Alumni Association to interview high school students applying for undergraduate admission to Brown University. Morriah lives in Kensington, Maryland with her family of humans, cats, dogs, and homeless kittens, which she fosters in partnership with a Virginia/Maryland animal rescue organization.

The District of Columbia, Virginia, and Maryland all have laws that revoke at divorce either the entire will or the portions benefitting a… MORE >

Kids and Their Lawyers: Children’s Custody Attorneys in D.C., Maryland, and Virginia

The old saying “out of the mouth of babes” neatly packages the concept that children can say perceptive and remarkably wise things, despite their youth. Although children may have much to offer in insight, they are usually indirect, unvoiced participants in custody cases. But children can have a direct voice and be represented by their own counsel. This article describes the types of child advocacy in Maryland, Virginia, and the District of Columbia.

Maryland A Maryland judge may appoint counsel for a child who is the subject of a custody proceeding to serve any one of three different roles: 1) to decide whether to waive or assert a child’s legal privilege of nondisclosure (“child privilege attorney”); 2) to advocate for the child’s best interest (“best… MORE >

Death and divorce—both events are extremely difficult and stressful in and of themselves. However, when death and divorce happen at roughly the same time, the consequences can be unexpected and may seem wildly unfair. Separation and divorce can have a significant impact on estate planning issues, which require diligent attention when marital issues arise.  Otherwise, the death-­and-divorce cocktail may shake out in a very unintended way.

Prior to Divorce When a couple begins to live separate and apart (which may include a separation under the same roof), without obtaining a limited divorce or legal separation order and without signing a separation agreement, the fact of the estrangement alone generally has no legal effect on the inheritance rights or fiduciary authority of a surviving spouse.  In other… MORE >

New Year, New Opportunity to Clean Up a Marital Mess

With each new year comes another opportunity to evaluate one’s life and make changes for the better. That can be particularly true in the domestic context, where a marital mess may be lurking. This article explains how postponing or prolonging a divorce or living in an ambiguous marital status may have a long-reaching, even catastrophic, impact. There’s no time like the present to start cleaning up a marital mess.

The Perils of a Prolonged Separation and Divorce

Maryland law recently changed to shorten the separation time to get a divorce from two years to one. This intimates that time is of the essence, and it definitely is when it comes to divorce. Separating without actually divorcing is perilous. Unless the spouses have a marital… MORE >