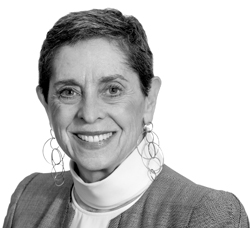 Linda J. Ravdin, a principal in the firm, concentrates in divorce and family law for families of all kinds. She joined Pasternak & Fidis in 2002, after 28 years with the firm she established after law school.

Linda is experienced in the resolution of spousal support claims, property issues of all kinds, and custody and child support. She has resolved disputes about the validity of premarital agreements, postmarital agreements and separation agreements, as well as the division of private, governmental and international organization retirement benefits, stock options, deferred compensation and nonqualified retirement benefits, businesses and professional services practices, real estate, and securities. She incorporates tax planning as part of negotiating family dissolution settlements. Linda is the co-author of the only comprehensive manual on divorce and family law of the District of Columbia. She is an experienced trial lawyer but believes in solutions that keep her clients out of court whenever possible. She works with clients who choose the collaborative process, mediation, or other forms of alternative dispute resolution. She is an experienced mediator and a volunteer facilitator with the D.C. Superior Court Family Court Alternative Dispute Resolution Program.

Linda is a nationally known authority on the law of premarital and postmarital agreements and has taught other lawyers all over the United States. She is the author of several books on premarital agreements, including Premarital Agreements: Drafting and Negotiation for the American Bar Association, as well as numerous articles. From 2010-2012 she served as the ABA Family Law Section Advisor to the Uniform Law Commission (ULC) Drafting Committee on the Uniform Premarital and Marital Agreements Act, adopted by the ULC in 2012.

Linda has taught a variety of continuing legal education programs, including programs on premarital agreements, the distribution of assets in divorce, division of retirement benefits at divorce, spousal support, and dissolution of same-sex marriages.

A lover of theatre, Linda also enjoys skiing, traveling, reading, museums, music, and baking. She is a member of the Board of Trustees of Round House Theatre, the firm’s neighbor in Bethesda, and she tries to attend every opening night.

Parties to a premarital agreement are free to make decisions during the marriage that alter their financial circumstances so long as they meet their contractual obligations. Post-execution actions can strengthen the validity of the agreement, result in a claim that the agreement has been revoked, or leave the agreement intact but change the economic outcome.

The low standards for validity create opportunity for a claim of duress, especially when a proposed agreement is presented close to the wedding or a weaker party does not get legal advice. (These claims rarely succeed.) Contract law acknowledges that a party may ratify a contract, thus waiving a duress claim. Acceptance of the benefits of a contract is generally considered ratification. When the agreement requires… MORE >

In July 2021, at its annual meeting, the Uniform Law Commission adopted the Uniform Cohabitants’ Economic Remedies Act (UCERA). Cohabitants already have the right to enter into a written or oral contract under general contract law principles. If enacted, UCERA would create statutory recognition of these rights and would expand the bases for cohabitant property claims.

UCERA has not been adopted, or even considered, by the legislatures of Maryland, Virginia, or the District of Columbia. It seems unlikely that it ever will. However, it addresses a problem that will continue to exist when two people live together, acquire property, make promises to each other about sharing assets upon death or dissolution, or when one party believes they have done so.  Whether UCERA is ever adopted,… MORE >

Premarital Agreements and the Gray Divorce

With boomers living longer and marrying multiple times, the argument for premarital agreements for these couples is compelling. A premarital agreement defines the property rights of the parties when the marriage ends at death or divorce. Not all marriages between mature people will last until death.

Property Rights at Dissolution. A premarital agreement will typically provide for each party to retain exclusive rights to existing assets and assets acquired during the marriage by gift or inheritance. Parties must decide whether they want a title-controls type of agreement, so that each retains exclusive rights to all property he or she owns, or whether they want to share the fruits of their labor. When both parties have substantial assets and both are still working, with the ability… MORE >

Many couples establish savings for the college education of their children. A Section 529 account is an attractive vehicle for these savings, as discussed in Adam Swaim’s article. What happens to a 529 account if the parents divorce? The appeals courts of D.C., Maryland, and Virginia do not yet appear to have wrestled with a parental dispute about a 529 account in a divorce. Only a few cases from courts around the country have done so. They offer some guidance to parties and their lawyers as to how our courts may handle a dispute over a 529 account that arises between divorcing parents. More importantly, they point out issues that parties should address when negotiating a marital settlement agreement where they have a Section 529 account for a child.

Premarital Agreements, Alimony, and the Tax Cuts and Jobs Act

The Tax Cuts and Jobs Act has eliminated the tax treatment of alimony that has been in place for more than 75 years.  Under the old law, alimony is deductible from the income of the payor and includible in the income of the recipient, provided the parties comply with the specific requirements of the Internal Revenue Code (I.R.C.).  Effective January 1, 2019, under the Tax Cuts and Jobs Act, parties will no longer have the option to enter into an agreement for taxable alimony nor will court-ordered alimony be deductible from the payor’s income and includible in the recipient’s income.  Some alimony obligations created prior to January 1, 2019, may receive alimony tax treatment under the old law; others may not.

In December 2017, Congress rushed to pass the Tax Cuts and Jobs Act:  a 503-page document that drastically alters several of the popular tax credits and deductions around which many divorcing families structure their financial planning.  This first major tax reform in decades affects taxes beginning in 2018 and will have a significant impact on divorcing families.  Family lawyers are still working on understanding the nuances of the changes and figuring out how to settle cases while some of the uncertainties in the application of the new law are being resolved by the Treasury Department.

Even the most amicable divorce can be expensive; it simply costs more to maintain two households.  Through effective use of the tax code, however, family law attorneys, often working alongside… MORE >

Premarital Agreements and the Migratory Couple

Contract law permits the premarital agreement to choose the law that will govern a dispute about validity of the agreement or enforceability of a specific provision even when the dispute must be resolved in another state’s courts.  Can the couple rest easy, knowing the law chosen in the contract—Virginia law in the… MORE >

In July 2016, the Uniform Law Commission (ULC) adopted the Uniform Family Law Arbitration Act (UFLAA).  It can now be considered for enactment by state legislatures.  Ideally, it will be enacted by all states and the District of Columbia so that there will be a uniform approach to arbitration of family law disputes across the U.S.

These are the key provisions:

Scope.  Parties can agree to submit any existing or future family law dispute to binding arbitration, including division of property, a claim for spousal support, custody and child support, a claim of breach of a marital agreement or a dispute about how to implement the terms of such an agreement.  A party who entered into an agreement to resolve a future child-related dispute by… MORE >

Arbitration in Family Law Matters: Has Its Time Come?

Alternative dispute resolution embraces a variety of processes designed to resolve legal disputes outside of a formal court proceeding.  One such option is binding arbitration.  In binding arbitration a neutral decision-maker, who could be a retired judge or a lawyer with expertise in the subject matter of the dispute, is appointed make a decision to resolve a legal dispute.  Arbitration has been used for many years to resolve commercial, construction, labor, and many other types of legal disputes.  It is rare in the family law arena, but that could change.

The Uniform Law Commission (ULC) is currently working on a Uniform Family Law Arbitration Act (the UFLAA).  It will be presented to the Commission at its annual meeting in the summer of 2016.  If the… MORE >

This article was originally published in the American Bar Association’s Family Advocate, Vol. 38, No. 2, (Fall 2015) p. 10-13, and is reprinted here with permission. PDF available here.

Adequate financial disclosure is essential to a valid and enforceable premarital agreement. When one party is the beneficiary of a third-party trust or the settlor of his or her own trust, the existence, key terms, and value of trust assets will necessarily figure into that disclosure. Even if a trust does not already exist, the parties may wish to incorporate one or more trusts into their premarital agreement terms.

The proponent of a premarital agreement will achieve maximum protection of property rights if financial disclosure is substantial, accurate, and meaningful—in other words, if it exceeds the minimum… MORE >